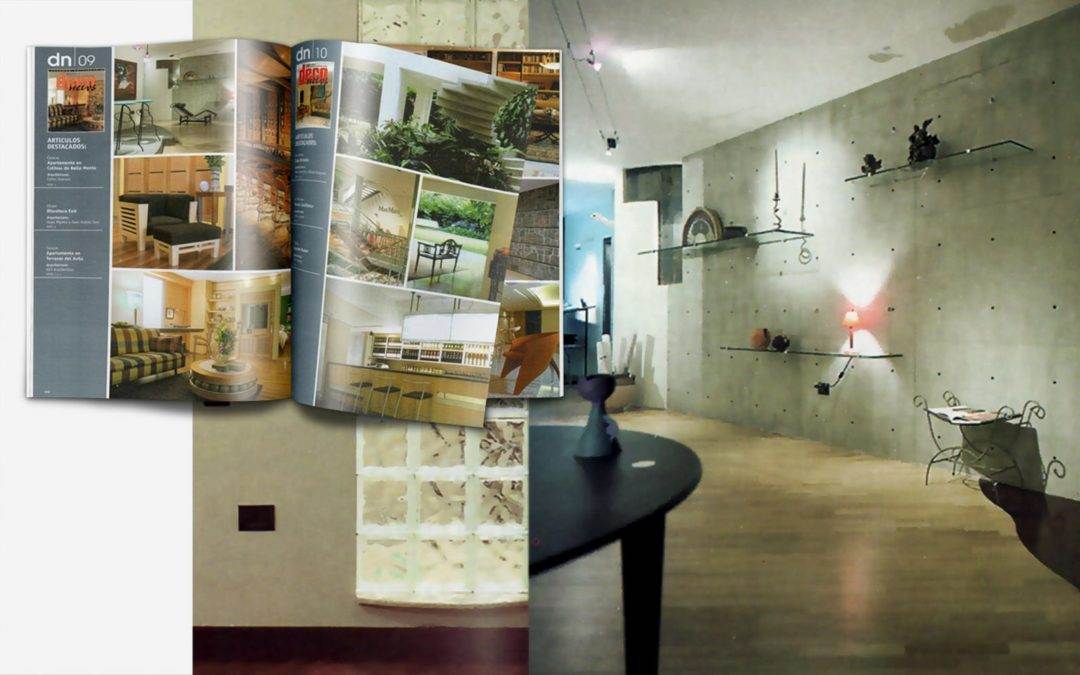 For those who still don´t know Carlos Guevara, we can tell you that he is the person responsible of the design and confection of absolutely all the boutiques of the Casablanca chain, as well as the Subsuelo discotheque and Solarium restaurant, located in Galeria Frende Shopping Mall, located in the island of Margarita.

What is surprising about Carlos Guevara, is not precisely the fact that in less than four years he obtained a high level and recognized client portfolio, but rather the fact that he achieved it with no need of an Architect degree.  It is to say that one day Carlos, after years in theater, graphic design and publicity, gave a spin to his life when he decided to be in charge of the remodeling of this apartment in Colinas de Bello Monte.  It was property of a former girlfriend, and his first model to build.

“At the time I take this challenge”, – explained Guevara, “I was sentimentally attached to the owner of the old apartment, who after revising various proposals of some architects decided to trust me after seriously presented my scale project”.  Not only did he try to portray in blueprints the new dimension that the place would acquire, but at the same time Carlos offered the owner a new proposal of interiorism, that at that time nobody had contemplated.  Maybe this came product of his artistic vision of the stages and scenarios, that defined from what dimension the new stage would be, to the furniture and utility objects that would contemplate the fantasy.

This apartment constructed in the 60¨s, counting originally with four bedrooms and three bathrooms in an area of 125 square meters.  However, it had a certain nobleness of structure that was maintained, like the height of the superior ceiling to the average (2.80 meters) and the presence of flat beams allowing the almost complete demolition and the consecution of a free floor, with no inconveniences of having to create lintels or placing dry wall; achieving in this way a totally clean ceiling and floor.  On the other hand, the original “large windows” were conserved, which were contained in the north and south façade, to make of the place a fortunate piece of light box, where the following was generated: a comfortable main room with a walk-in closet, a smaller second room and bathroom for guests; an intimate study room and an ample social area, where all the activities to share coexist.

This central area presents floor finishing that ride between capure wood and show racks and are united in a wave like hook, to combine with a stage where the kitchen-bar section is located (still not placed at the time of the photographs) and the guest bathroom.  The stone, but in other tones and accompanied by marble, likewise follows its course towards the main bathroom, where the permeability of light is possible with the help of glass blocks.  The ribbon windows that could not intervene due to façade matters, presented the inconvenience of the proximity of other buildings that affected the view: “It was resolved then,” – explained Carlos Guevara – “frosting the glasses, making curved drawings that would mix to the game of lines that the floor make, allowing then the entrance of light, but avoiding the ugly vision  of buildings nearby, proposing the absolute blocking to the exterior.

Other details to highlight is represented by holding concrete wall, which is clinged with the help of a steel cable system, some glass stands to exhibit pieces and decoration.  The light is the great leading role, since it is present through floor and ceiling inlays that achieve to punctuate spaces, highlight objects and orient the playful use that this place screams out.  This enjoyment scenario among friends and homeowners is reinforced by certain pieces of furniture that at that time were in style in the country, such as the Mariscal benches or the “tractor seats” created by Castiglioni in 1957, produced later (in 1971) by milan House, ZANOTTA.

Carlos Guevara is self-taught; however, at times he can be empirical, not afraid of exploring what started as an impulse more than a pursuit, to make of it precisely that, its other form of seeing life.